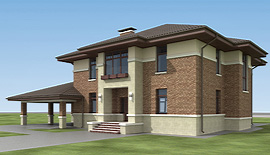 Tower of Babel (1563) Pieter Breugel the Elder (1525/301569). Oil on wood, Kunsthistorisches Museum, Vienna. The "Myth of Babel" is represented here in an equally powerful allegorical work of art by the great Netherlandish master. An atypically biblical and "architectural" work for the humanist landscape painter, it resonates to this day with the idea of the supreme folly of man's earthly ambition.

Tokyo City Hall Competition, Computer-Generated Interior Perspective View of Atrium. (1988) Artist/Designer: Arata Isosaki. Ink jet print on paper from the office of Arc Yamagiwa, Tokyo, 76.8cm 108.6cm; Courtesy of Centre d'Architecture Canadien/Canadian Centre for Architecture, Montreal. Known primarily for the large scale silk-screen representations of his designstypically seen in plan and elevation which are a modernist take on Beaux-Arts graphics, this somewhat unusual three-point perspective is a convincing alternative and a highly effective way of organizing the visual elements of this interior space.

Fantastic Monuments (CA.17471750) Giovanni Battista Piranesi (17201778). Pen, brown ink, and brown wash over graphite on cream laid paper, 19.8cm 27.7cm; Courtesy of Centre d'Architecture Canadien/Canadian Centre for Architecture, Montreal. The actual genesis of this piece is speculative; there are representative elements of the Prima Parte from 1743, though this work was completed some years later. The full range of visionary architectural elements, theatrical use of lighting effects, and bold compositional imagery mark this as an example of the artist's more developed style.

Studio di 1'Architeture Assassinee. (1974) Aldo Rossi. Ink, 21cm 29.7cm Far more than an academic, isolated mind is at work here in this witty, expressive, and personal ''architectural" assemblage with its implicit dialogue on the conflict of chaos and order.

Proposed Stage Set, "Death in Venice". (1991) T.W. Schaller. Watercolor, 46cm 46cm A simple stair and a mysterious light set the atmosphere and reveal the essential idea of this piece which seeks to layer and obscure information and to defer resolution for a heightened sense of the unknown.

The Odyssey Project. (1996) T.W. Schaller. Architects: Frank Lloyd Wright and others. Watercolor, 117cm 58. 5cm; Courtesy of The Otis Elevator Company. Due to the sheer physical size of this proposed design and in order to maximize visual impact, the rendering of specific detail was avoided in favor of sculptural form. In addition and toward the same end, the light, cool tones of the focus structure contrast with the darker, warmer treatment of sky and overall atmosphere.

Ameritrust Tower. (1991) T.W. Schaller. Architects: Kohn Pedersen Fox. Watercolor and pencil, 70.2cm 42.9cm The essential design gesture created by the juxtaposition of a solid masonry tower and a floating glass plane is treated graphically as a simple dialogue between warm and cool tonalities.